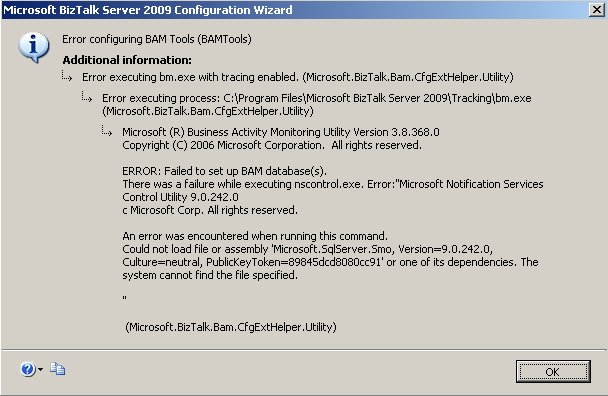 When I used the SSNS 2005 RC1 version, I started encountering errors that indicated there must be other dependencies that this install relied on. Here is the first error I was getting while configuring BAM:

The main error here is “Could not load file or assembly ‘Microsoft.SqlServer.Smo, Version=9.0.242.0’ …”. So I tried copying all of these SQL 2005 assemblies to my VM and then dropped them in the GAC. Then I tried to configure the BAM Alerts again and got this message:

The main error here is “This SQL version (10.0) is not supported.”. So obviously at this point I was steaming mad – what is the problem here? I did some searching on the nscontrol.exe named in the error and found this http://download.microsoft.com/download/f/4/e/f4e80c76-3b69-4a42-a90b-79aeaca1177d/ReadmeSQL2005SP3NotificationServices.htm which mentions that there are 3 dependencies of SSNS and all must be loaded in order for SSNS to function properly. I tried download all three but still could not get BAM Alerts to configure properly. At this point I realized the next option to try would be to install a named SQL 2005 instance because SSNS really requires the 9.0 database version to work properly. This turned out to be what worked for me. I later found out that in order for BAM Alerts to configure properly, all of the BAM databases have to be on the same SQL instance so you need to have the SQL 2005 database services there anyway in order for BAM to all configure properly. Below I give the final install order if you want to use BAM Alerts with SQL 2008.
Final successful install order:
VM Base: Windows Server 2003 R2 SP2, SQL 2008, VS 2008 (minus SQL Express) installed in this order.
VM Diff: