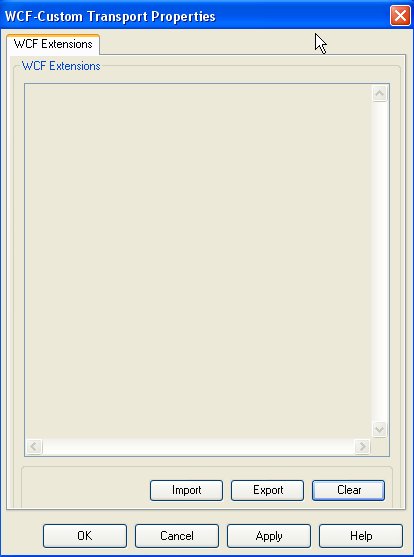 A few days ago a service pack for BizTalk 2006 R2 (known as BizTalk 2006 R2 SP1) was released and it includes a large number of rollup fixes accumulated from quite a few hotfixes. I ran it on my local development box and it installed fine for the most part. It did do have a hickup on HL7 though. It also includes some new product features which is a little unusual for a service pack release. Perhaps it should be called BizTalk 2006 R2.5. 🙂
Here is the link on the release announcement: http://blogs.msdn.com/biztalkcrt/archive/2009/10/09/announcing-biztalk-2006-r2-sp1.aspx
One of the major new product features in the service pack is better tooling around WCF extensions. This post is going to give an introduction on how this worked prior to the service pack, then go through a brief tutorial of how I tested the new functionality. This post is based on SP1 beta so it is subject to change.
Prior to SP1:
If you implemented a WCF extension prior to SP1 then you had to go through a considerable amount of complexity to get the extension to show up in the BizTalk WCF port configuration pages. I retraced Richard Hallgren’s steps in his post http://www.richardhallgren.com/category/wcf/ as a good example of getting an WCF extension in the form of an EndpointBehavior. The relevant steps I want to focus on are:
The difficulty with this approach is that for every custom behavior (which might be used on a per port basis), you have to put stuff in machine.config. In most server environments this can require moving mountains to edit machine.config. Also, if you use behaviors on many ports it can quickly become difficult to manage. SP1 limits the scope of the config item to the executing host but it also introduces a couple challenges of its own.
With SP1:
The current SP1 approach is to configure config options using a tab on the adapter handler properties. The directions are given for the custom send handler here:
http://msdn.microsoft.com/en-us/library/ee519505(BTS.20).aspx. This comes from the overall documentation for the release: http://msdn.microsoft.com/en-us/library/ee532481(BTS.20).aspx
Basically what is involved is importing a config file that has the custom behavior defined. The SP1 beta documentation mentions this as a custom binding but it means the custom behavior. Here is a screenshot of what the page will look like after SP1 is installed:

Then here is what the page looks like after you have imported a custom extension: 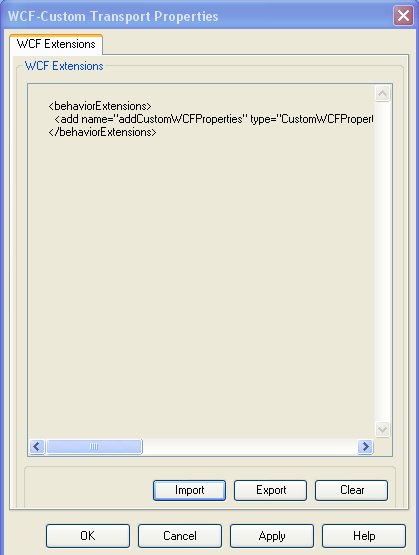 This current documentation does not provide a template or starting point for what the imported config file should be so there is essentially a gap. What I did was try to use the machine.config from the Pre SP1 directions because I thought this is the most direct route that people are likely to do after they run SP1. A better approach would be to use the template I have at the bottom of this post as a starting point for the config file you import.
Unfortunately the process is more complicated using machine.config because there are extra nodes in the machine.config that the import config button does not like.
You will get errors like:
—————————
Import WCF configuration
—————————
Unable to import configuration from file "C:Documents and
SettingsbencDesktopmachine.config".(System.Configuration.ConfigurationErrorsException) It is an
error to use a section registered as allowExeDefinition=’MachineOnly’ beyond machine.config.
(C:Documents and SettingsbencLocal
SettingsTempConfig73d27aa8-b21b-4d47-abeb-c81ec7a756fc.config line 202)
So if you want to go this route, follow these steps to clean the machine.config to the point that the page imports the config file properly. These steps are subject to what is in your machine.config. Also, I am not sure if any of these steps will have any undesired consequences and you should use these steps at your own risk. But these worked for me:
Then try to import again and it should work. The screen will look exactly alike to the picture Richard Hallgren had for choosing the custom behavior, you just took a different path. The custom WCF extension behavior is the first in the list shown below:

I am guessing that the import config button is trying to merge part of the imported configuration into some master configuration and this is why it is failing. If you try to import a config file that does not cause errors and does not have any extensions, you will not get a message back that nothing was imported, the text box just stays blank.
You will then be able to select the custom behavior for a port running under the handler where you imported the config file.
I have found that it is actually possible to import the same config file multiple times across multiple handlers so this means it is possible to have one WCF extension configured for multiple BizTalk hosts.
Once you get through the wizard you can then export the WCFExtensions config file which gives you a template for the future that I have included here (not sure why the ESB line exported here):
<?xml version="1.0" encoding="utf-8"?>
<configuration>
<enterpriseLibrary.ConfigurationSource selectedSource="ESB File Configuration Source" />
<system.serviceModel>
<behaviors>
</behaviors>
<extensions>
<behaviorExtensions>
<add name="addCustomWCFProperties"
type="CustomWCFProperties.Behavior.PromoteUserNameBehaviorElement, AddCustomWCFPropertiesBehavior,
Version=1.0.0.0, Culture=neutral, PublicKeyToken=705e34637fdffc54" />
</behaviorExtensions>
</extensions>
</system.serviceModel>
</configuration>
Here is a link to my exported .config file (shown above) that I used to successfully import Richard Hallgren’s
custom endpoint behavior: http://cid-62e68922e47bc425.skydrive.live.com/self.aspx/Public/WcfExtensions.config
Hopefully the documentation will improve in the final version of BizTalk 2006 R2 SP1.
Thanks,
October 22, 2009 0
I have been working with VS 2010 quite a bit since the CTP about five months ago. The most recent release is Beta 2 and it was dropped onto MSDN for subscribers back on Monday. Today it rolls out for public consumption:
http://msdn.microsoft.com/en-us/vstudio/dd582936.aspx
I am still working on getting a version of VS 2010 Beta 2 completely installed. I have had 2 failed installs at this point. Here are a few gotchas to watch out for:

I have reported a couple bugs already, and if you find any, be sure to report them at:

October 22, 2009 0
I checked in the Windows Server 2008 English BizTalk 2009 pre-requisites redistributable and it DOES now include the ADOMD v10 install. Yahoo!
So after exploring the new information available on BizTalk 2009, I noticed that the whole SQL Server Notification Services documentation story has been updated dramatically. I had posted a few days ago about how the link from the 2009 Beta install guide for SSNS went to a version from SQL 2005 RC1 did not provide enough files and resulted in lots of errors. Now the documentation sends you to a Microsoft support site where you can download the missing SQL dependency files (SMO among them): http://support.microsoft.com/hotfix/KBHotfix.aspx?kbnum=953752. This should be a huge improvement – this should enable BAM Alerts to work without needing to install a secondary SQL 2005 instance. The result of my configuration research shows there is more than one supportable configuration for using SSNS – either as a scaled down version or on a separate SQL 2005 instance.
For the last couple of months I have been playing with BizTalk 2006 R2 on Windows Server 2008 and SQL 2008 to get a better understanding of software compatability between these products. I had posted on the gap of information about what server roles and features would be necessary to use BizTalk in a Windows Server 2008 environment. Fortunately, the recently released BizTalk 2009 install guide for Windows Server 2008 does mention the required roles and features for Windows Server 2008 under the section describing what should be installed with IIS. The install guides have now been split up by OS, but there is unfortunately not one for installing onto Windows 7 – perhaps we will have to wait for this to be released later. 🙂
It looks like the updated documentation does not include any mention of the two separate BizTalk 2009 RFID install images – one bundled with the BizTalk server software, and one as a separate ISO. The separate ISO has a lot more samples on it so be sure to get the separate ISO too. Both are available on MSDN.
April 28, 2009 0
I just found out that the BizTalk 2009 release has been extended to the general public: http://seroter.wordpress.com/2009/04/27/quick-thoughts-on-formal-biztalk-2009-launch-today/. I have been posting on various issues with the RTM version. It looks like the 2009 install guides can now be found at

http://go.microsoft.com/fwlink/?LinkID=128383 – the link was reset and it connects successfully. Additionally, the install guides now mention ADOMD v10 so please stop using the Beta install guide – it has now been replaced. I will be posting here soon about whether the updated prerequisites CAB includes ADOMD v10 and some other details I have been working on from the RTM version. Interestingly, the MSDN downloadable version is still from 4/6/09 (when the RTM release occurred) so it does not look like there has been an updated build; just updates of the supporting files.

If I notice anything in the install guides or the other support files, I will be sure to post about it here.

April 28, 2009 0
For anyone that is downloading the BizTalk 2009 RTM from the MSDN downloads, you may have found that the Installation Guide.htm on the image refers to http://go.microsoft.com/fwlink/?LinkId=128383, which is the location of the BizTalk 2006 R2 guides. This link should be updated soon. As far as I know, no new installation guide has been released yet so your best guide is the 2009 Beta install guide download from https://connect.microsoft.com/site/sitehome.aspx?SiteID=218.
Once I hear about a new version of the install guide I will post more about this. Good luck to everyone trying out BizTalk 2009 RTM.
Thanks,
April 9, 2009 1

Well I guess I missed the launch party – BizTalk 2009 is now available for MSDN subscribers. I reported a lot of bugs during the BizTalk 2009 Beta and TAP releases so it will be interesting to see if people encounter any of these. Thanks to my friend Thiago Almeida for pointing out the ADOMD 10 error (http://connectedthoughts.wordpress.com/2009/04/06/biztalk-2009-rtm-prerequisites/). I had seen this during the TAP version and unfortunately it looks like a final bug.
The following screenshot shows what you will see if you install BizTalk 2009 in an environment with SQL 2005: